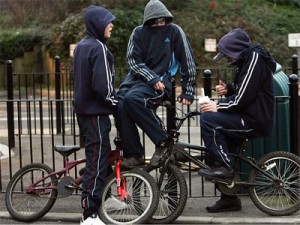 Students & youths on the Island could be hit with £60 on-the-spot fines if they look like they may be ‘up to no good’ as part of a new police initiative.

Island Police, the Council, and the Isle of Wight College, have all joined forces for Operation ‘Nothing Better To Do’ – an initiative which hopes to cut anti-social behaviour across the Island.

Those aged 13-18 will be the target of the new venture and police have already met with many students at the college, as well as Island high schools, in order to scare them.

Acting Inspector Polly Scar said of the initiative; “We need to make teenagers aware that they can’t just stand around doing nothing wherever they like, looking shifty. It makes the place look untidy.” It’s understood youths will initially be asked to move on, if they refuse they will be given an on-the-spot fine.

“With so many beautiful towns and parks spoiled by scruffy looking oiks in hoodies, not only does it put off tourists but the poor OAP’s fear for their lives every time they go out” said Polly, “It can’t go on!”

It’s understood that East Cowes will be a ‘zone of tolerance’ with no police presence, mainly because it couldn’t possibly look any worse than it already does.

You may have missed

Island Drivers To Get Mainland Training

The Wonders Of The Isle Of Wight

Island Men Twice As Likely To Suffer From “LaDS”

Search For The Shite Town Of The Year

Tourism Up As Boat Falls Over

Black Day As Island Mourns ‘Woman Of The People’

Island Police To Pilot Cyborgs In Bid To Cut Crime